Although MS plays tricks on my memory, it’s unlikely that I’ll ever forget the 12 months that began one June. In June 2000, my beloved wife Michelle passed away as a result of cancer. By the end of 2000, I was taking anti-depressants and had my third attack of optic neuritis in as many years. I was diagnosed with MS in March 2001 and I went on sick leave in June 2001. I never went back to work again.

Like many people with MS, finding out I had the disease explained a lot. Now I finally knew the fatigue, forgetfulness and lack of strength was caused by something! The anti-depressants I was on initially softened the blow of being diagnosed, but I stopped taking them shortly thereafter, because they also prevented me from enjoying my life. I decided to concentrate on the things I could still do rather than on the things I couldn’t.

I like to treat my MS aggressively. I started by using Avonex, which stabilised my MS. After a couple of years, however, I became over-sensitive and switched to Copaxone, but because of severe injection marks I had to stop within a year. Now I enrol in clinical trials whenever possible because not only do I receive treatment but I also play a part in the search to cure and treat MS. I have ongoing symptoms of fatigue, concentration and memory loss and a lack of strength, mainly in my legs, and I currently have one or two relapses every year, which I treat with Prednisone. 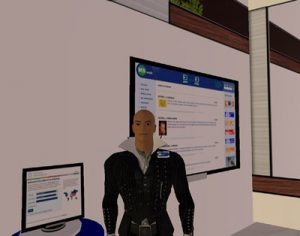 Volunteering continues to give me a sense of fulfillment and satisfaction, and since my diagnosis I have done all kinds of voluntary work. At the beginning of 2007, I started working as a volunteer for MSweb. I am Webmaster and part of the editorial board, responsible for technical issues. The good thing about this “job” is that everyone at MSweb has MS so I never have to explain anything. Also, as everyone in the team loves what they do, it is a great team to be part of. The website is one of the most popular MS sites in the Netherlands, with over 1,200 visitors a day!

Earlier this year, MSweb was given the opportunity to participate in a project on Second Life. Second Life (SL) is a free, online, 3D virtual world, built and inhabited by its participants, known as avatars. In SL, you can be whatever you want to be. You can dress your avatar, build houses to live in, start a shop and make money. SL also has its own virtual currency, the Linden Dollar, which you can exchange for real US dollars. 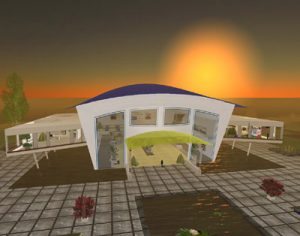 The MS Centre of the University of Amsterdam (VUmc) was offered an island by a sponsor, and in collaboration with MS Stichting Research (MSIF’s Dutch national member), MSweb, MS Vereniging Nederland (the Dutch MS Society) and MSIF, they constructed a building where you can find all kinds of information about MS, and also meet other people (avatars), most of whom have MS. The island’s slogan is Gaining Knowledge – Sharing Knowledge – Meeting People. You can find our building by searching for “MS Island Vumc”, inside SL. The VUmc SL Project Manager, Annette van der Goes, and I presented MS Island at the annual MSIF Living with MS Day in Prague in October 2007.

The Netherlands is not a bad place to live when you have MS. Social Security is well organised, a housekeeper visits my house weekly, and physical aid, such as a wheelchair or house modifications are all paid for, either by the government or (affordable) medical insurance. When I was in Prague I learnt about countries where people with MS are a lot worse off than me, so I have nothing to complain about!

I am very grateful that I still have the opportunity to do the things I like and my MS hasn’t stopped me; instead I just find a different way to achieve my hopes and dreams.